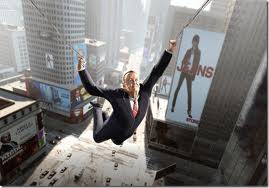 One of the highlights for any Marvel film are comic book creator Stan Lee’s often humorous cameos. Some are better and more memorable than others. These are his best appearances to date in Marvel superhero films.

10. Security Guard With His Partner, Hulk: One of the very few highlights in this film was seeing Stan Lee and Lou Ferigno together as security guards who pass by Bruce Banner. And he actually has lines to speak unlike earlier cameos (and screaming “Look out!” as debris falls in Spider-Man doesn’t cut it).

9. The Pickup Truck Driver, Thor: During a segment where New Mexico locals try to move Thor’s hammer, Stan tries using his pickup truck to loosen the mystic weapon out of the ground without any luck.

8. Man In The Park, The Avengers: In the film’s final moments there is a media montage with reporters interviewing New York citizens about the Avengers. Stan is park visitor who scoffs at the idea of the Avengers. In his too-short appearance he remarks, “superheroes in New York? Give me a break!”

Steve Rogers. After Rogers is called to accept the award,  a diminutive official informs an announcer that Rogers won’t be attending. Stan mistakes this guy for being Rogers and comments, “I thought he’d be taller.”

6. Man Drinks Hulk Juice, The Incredible Hulk: Bruce Banner’s gamma-irradiated blood accidentally spills into a juice bottle in a bottling plant that is later drunk by Stan. He reacts immediately to the drink and mutters “wow.” According to reports in the film, the juice had quite a punch!

5. Stan Lee As Hef, Iron Man: Now is Stan supposed to be playing famous Playboy magnate Hugh Hefner or is he only mistaken for Hef because of his wardrobe and gorgeous entourage? The debate goes on with this funny scene where Tony Stark addresses him as Hef when Stark arrives at a function.

3. The Librarian, The Amazing Spider-Man: His most recent appearance is a very funny one. A heated battle between Spider-Man and the Lizard spills over into Peter Parker’s high school library. Stan Lee plays an oblivious librarian to the chaos behind him because he is listening to classical music on his headphones.

Storm are holding a posh, invitation-only wedding in Manhattan. Stan Lee is prevented from attending by an usher because he’s not on the guest list. It was his funniest appearance and a recreation from Fantastic Four Annual # 3 where he and Jack Kirby aren’t allowed into the characters’ wedding.

1. Stan Lee Meets Peter Parker, Spider-Man 3: Peter Parker in the middle of swooning over himself early in the film encounters Stan as they both admire a news blotter on New York’s buildings about Spider-Man. He looks at Peter and tells him “I guess one person can make a difference. ‘Nuff said.” This is Stan’s best line spoken in these films and sums up a poignant philosophy that is at the core of his stories. Also, unlike other cameos it’s prominent and memorable.

On that note, one thing keeps glaring out with these cameos. Co-creators Jack Kirby and Steve Ditko aren’t featured anywhere in these films. Of course, Kirby is no longer with us but they could at least feature a landmark named after him. Wouldn’t it have been cool if the Thing passed by the corner of Yancy Street and Kirby Avenue? Or if Peter Parker attended the Ditko Art Exhibit? Something the filmmakers can think about for future films.

Check out this video that features Stan Lee’s cameos: