With the release of Matt Reeve’s The Batman, which features three main Batman villains (The Riddler, The Penguin, and Catwoman), it’s time to take a look at some unused antagonists of the Dark Knight who either have never been seen in live action or have only appeared on the various TV shows featuring Batman and/or the Bat Family.

This character is more of an intellectual threat to Batman. A psychologist and evil genius, Dr. Hugo Strange runs Arkham Asylum, but uses his intellect to commit crimes while under the guise of trying to reform criminals. Batman always sees through this and stops his plans, but Strange’s abilities and access to Arkham’s most dangerous villains allows him to evade justice many times. His appearance in the Gotham show was a highlight and he would make a great antagonist in any Batman film.

Solomon Grundy is rather large, super strong villain that is basically a zombie who was resurrected in the swamps of Gotham. He appeared in the television show Gotham, as well as the various animated shows and is a great bad guy for Batman to deal with. Showing up in a grounded Batman film would be strange, but would give it a good horror movie feel and play on our fears of unknown creatures in the dark.

This character had a prominent appearance in Suicide Squad, but didn’t interact with Batman onscreen. I liked this portrayal of Croc and would be happy to see him appear again, especially going up against Batman in the sewers of Gotham City. His gruesome reptilian look and super strength makes him a real threat to the Caped Crusader and like Solomon Grundy, evokes fears of unknown creatures in forgotten places. His appearances in Batman: The Annimated Series and other shows are always great to see.

A criminal who kills according to the dates and significant holidays of the calendar, this villain had a great appearance in the animated movie The Long Halloween with his Hannibal Lecter-like presence while being questioned by Batman in Arkham Asylum. Batman was trying to find out about murders being committed during holidays, and turned to him for insight. Having something like this in live action would be great to see and would fit Matt Reeves’ take on the Batman universe, with his version of the Riddler being portrayed in The Batman as a serial killer trying to take down Gotham City and expose its many secrets.

Another unique villain, the Ventriloquist is a meek gangster named Arnold Wesker who can only commit crimes while having a dummy, named Scarface on his hand who has a violent personality and rules his gang through fear. His appearances in Batman: The Animated Series werememorable and showed an interesting split personality similar to Two-Face. The audience was kept guessing as to who was really at the center of the Ventriloquist’s schemes, the mild mannered Wesker, or the hot tempered Scarface and it would be fun to see in a film.

Jervis Tech is a demented villain is obsessed with the Alice in Wonderland story and is frequently shown to be determined to live out the book by kidnapping his would-be Alice and forcing her to partake in his bizarre rituals, and commit crimes using mind-control hats. Obviously, Batman always has something to say about that, but had to deal with the Mad Hatter’s insanity and overcome Tech’s schemes. Having this kind of villain in a film would be a strange but interesting take in a Batman film.

A shapeshifting villain that uses his sludge-like appearance to mimic anyone he wants, Clayface has caused all kinds of problems for Batman, and his morphing attributes would be nice to see on the big screen. His ability to create various weapons with his arms evokes the T-1000 from the Terminator series and was something that was used to great effect in Batman: The Animated Series, but to date hasn’t been attempted in live action.

This unusual villain is literally the flip side of Batman. Dr. Kirk Langstrom is a scientist who develops a serum that turns him into a huge bat-like creature that terrorizes the skies of Gotham City. Man-Bat has the distinction of being the villain that appears in the very first episode of the classic Batman: The Animated Series and is a unique take on the were-wolf mythos. Bruce Wayne eventually befriends Langstrom and helps him overcome his curse by developing a cure, but the threat of the Man-Bat reemerging is always in the background. Having a massive bat-creature duking it out with Batman on various rooftops would be thrilling to see on the big screen.

With only a brief cameo at the end of Justice League, this master mercenary/assassin known as Slade Wilson has been a match for Batman. Deathstroke was supposed to be in the now-defunct Ben Affleck-directed Batman solo film as he battled Batfleck in Arkham Asylum. His deadly skills and mastery of weapons are shown to great effect in the Titans series as he divides the team from within, pitting them against each other and nearly destroys them in his quest for vengeance. Deathstoke also had a famous role in Arrow and became that show’s best villain. He has recently appeared in his own animated film and it would have been great to see him go up against Batfleck, but hopefully there is a future for him in any further Batman films.

The classic story “A Death In the Family”, which shows Jason Todd aka the second Robin being killed by the Joker, resulted in the emergence of a resurrected Todd as the anti-hero/villain the Red Hood. He terrorizes criminals using lethal force and goes after Batman due to his outrage at the fact that Batman let the Joker live, even after being responsible for Todd’s death. This emotional tale is told in the excellent animated adaptation Under the Red Hood and is also seen in a different form in the HBO Max series Titans. It would be great to see this adapted into a theatrical form since it strikes at the core of Batman’s code of ethics and his battle to control his demons while contrasting this with the Red Hood as a Punisher-like vigilante, who goes over the line trying to clean up Gotham City.

Batman has an iconic rogues gallery. While the most famous ones have been portrayed many times in films, there are many more that show the variety of villains that exist in his universe. Some are more serious and deadly, while others are more fantastical, but all of them are interesting characters that would be great to see in any big budget Batman film, including a sequel to The Batman.

With all the headlines about how the film Birds of Prey and the Fantabulous Emancipation of One Harley Quinn is not doing well in cinemas, many have overlooked the animated series Harley Quinn, which is a better showcase for the popular DC villain. Currently streaming on the DC Universe app, Harley Quinn is a hilarious and better fit for one Harley Quinn than the live-action film.

As can be guessed by the title, Harley Quinn is about the Joker’s ex-girlfriend (voiced by Kaley Cuoco) and her efforts to move past the Clown Prince of Crime and build her own reputation as a major league villain. Along the way, she acquires her own gang of misfit villains who turn out to be something not quite a family but almost as close knit. The gangmembers include her BFF Poison Ivy (Lake Bell), who functions as a world-weary straight foil to Harley’s antics and rants; Dr. Psycho (Tony Hale), a small-statured, misogynistic megalomaniac whose foul-mouth gets him exiled from the Legion of Doom; Clayface (Alan Tudyk), who aspires to be a great thespian as he shapeshifts; and King Shark (Ron Funches), a deadly half-man/half-shark hybrid who is generally good natured and a social media wiz.

In the episodes, Harley has to contend with her skeptical colleagues and fickle public as she tries to pull off the major crime that will put her name on the books. During the misadventures she encounters many DC heroes and villains, especially Batman (Diedrich Bader) and the Joker (Alan Tudyk) himself. During her interactions with the Joker and the way she keeps bringing him up, it’s clear to everyone, except Harley, that she has unresolved feelings for the Batman foe. As the series progresses, the viewers and Harley herself learn much about her and what drives her. All jokes aside, the series is quite deep as she learns to live a life without Joker and be her own person. Watching her grief and bitterness, and the Joker’s apparent disregard for her, it is easy to feel sympathetic for her. But this show is not a pity fest. Just as soon as an emotional moment occurs it is quickly glossed over with some slapstick moment or raunchy humor.

Harley Quinn is way out there when it comes to vulgarity. Riddled with F bombs and lewd humor and bloody violence, this series is definitely not for the kiddies. Some prudes will be put off by the raunchy nature of Harley Quinn but it will have everyone else in stitches, especially comic book fans. Surprisingly, the show doesn’t do any fourth-wall breaking like Deadpool so that is a relief since Harley Quinn finds other ways to keep viewers laughing or grinning with giddiness. Namely the characters and plots as seen in the episodes.

In one episode, “Finding Mr. Right”, Harley steals the Batmobile to gather headlines and Batman’s attention. Instead, she and her crew are harassed by the Damien Wayne version of Robin who is basically a bratty kid that outright lies about his interactions with Harley. This turns her into a public laughing stock and her efforts to make herself seem formidably evil kept backfiring.

Other episodes are downright bizarre and nonsensical, but still amusing. “You’re a Damn Good Cop, Jim Gordon”, has the police chief (Chris Meloni) becoming best friends with Clayface’s dismembered hand. Long story short, after Clayface loses his right hand, it becomes an independent entity complete with stubby legs and a face on its palm. Brought to Jim Gordon as evidence by Batman, the hand and Gordon bond due to their loneliness. It has to be be seen to be believed!

Throughout all the zaniness, Harley truly shines as a character and a comedienne. Her friendship with Poison Ivy is arguably the heart of the show and their comedic chemistry work perfectly and go up there with Lucy and Ethel or Laverne and Shirley. 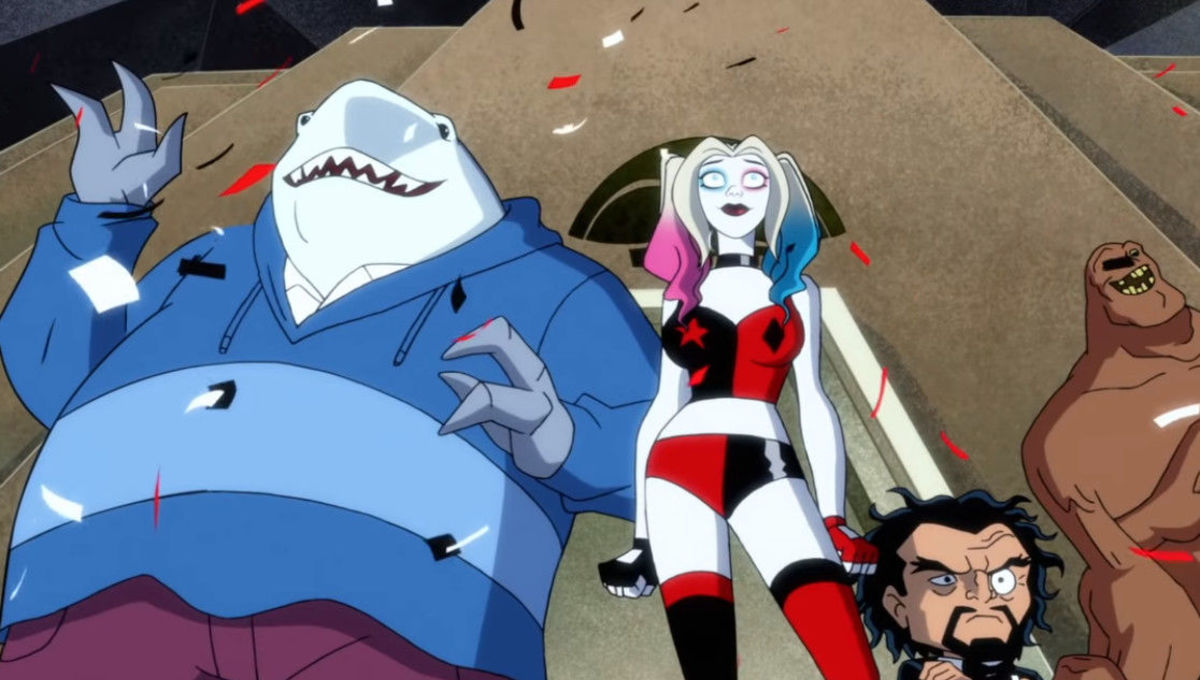 Harley Quinn deserves much more attention than it is getting. It could be due to the low number of subscribers the DC Universe app receives or Birds of Prey has drowned out the animated series. Thankfully, the powers that be saw how well done the show was executed and Harley Quinn is getting a second season which will come out this April. So we’ll be treated to more funny antics from one Harley Quinn.