When Netflix dropped the third season of Daredevil a few weeks ago, viewers witnessed why Daredevil is the best of the Marvel Netflix shows. As the first of these streaming shows, Daredevil was an immediate hit with critics and fans, although it faltered in its second season. Then following the missteps of other Marvel Netflix shows, many doubted the quality of them, including Daredevil. Fortunately, the third season of the Marvel superhero show re-affirmed our faith with a triumphant season.

The third season takes place after the events of The Defenders where Daredevil/Matt Murdock (Charlie Cox), the blind superhero with enhanced senses, was presumed dead. He barely survived and is in the care of Sister Maggie Grace (Joanne Whalley) in the church where he grew up. As he recovers, the notorious crime boss, Wilson Fisk/Kingpin (Vincent D’Onofrio), is in prison thanks to Daredevil and carries out a complex scheme to get out of prison and manipulating members of the FBI to serve him as he re-enters public life. Part of the scheme includes destroying Daredevil’s reputation by having an impersonator murder people in cold blood. While this goes on, Matt goes through a crisis of self and faith as he struggles with his ideals when dealing with Fisk and his lackeys. One of them happens to be FBI Agent Ben Poindexter (Wilson Bethel), a deeply disturbed man with a supernaturally deadly aim. Fans know that this is the villain Bullseye and he is more than a match for Daredevil. He is so deadly with his skills that he defeats our hero on more than one occasion, and these fight scenes were actually terrifying to watch with their brutality.

Speaking of fight scenes, the third season of Daredevil continues the tradition of presenting “one-take” fight scenes that are so memorable and the one shown in the fourth episode (“Blindsided”) does not disappoint fight fans. In fact, the fight scene, which takes place in a prison, probably tops these scenes with its elaborate and long nature. It features savage fisticuffs, lines of dialogue and a well-choreographed riot scene that all lasts over ten minutes! One has to wonder with the intensity of these fight scenes why it is so difficult for the other Marvel Netflix shows to match the ones featured in Daredevil.

On the other hand, other episodes pack emotional punches and are haunting character studies. One of them, “Karen” explores the back story of Karen Page (Deborah Ann Woll) and it features some powerful acting by Woll as we learn she is not the innocent person Matt and his buddy Foggy Nelson (Elden Henson) believe her to be. There are several surprising twists and revelations. Some are inspired by the comic books while others keep us guessing. We’re never sure who will live or die and its often unexpected and tragic.

What makes Daredevil such a triumph is that it focuses on characters, which are perfectly played by topnotch talent. Cox, D’Onofrio and Bethel are the standouts in the stellar cast as they exude raging demons within them and we see how each of the three grapple with their inner turmoil. Charlie Cox continues to sell his Matt Murdock as a decent, tortured man who is pushed to the edge and has to find a way to center himself. Meanwhile, Vincent D’Onofrio’s Kingpin (called by that name for the first time in this Marvel Netflix show) is a terrifying monster who is barely able to control his inner fury. There are some wincing moments when he lets his volcanic temper explode which you can’t help but watch. Bethel’s Poindexter is a true psychotic but great pains are taken to show what led this FBI agent to fall from grace. There is a new character who has an impressive arc. That being FBI Agent Ray Nadeem (Jay Ali), an honorable man who is tragically ensnared in Wilson Fisk’s complex web.

The season may come off a bit slow in the first couple of episodes but after having seen the entirety of Daredevil season three it is clear that the quieter pace of the early episodes were needed to set up the characters and situations. The payoff starts fairly soon and it is worth the wait.

Daredevil season three proves that not only is it the best of the Marvel Netflix shows but the best superhero TV show out right now. It would be a shame if Netflix were to cancel it given the recent uncertainty of the Marvel Netflix shows. The showrunners were hoping to have the show run five seasons and there is plenty of story left to tell with the Devil of Hell’s Kitchen. Besides without not given too much away, it would be nice to see Matt don the red suit again.

Brutal, gritty, engaging, authentic. Those are thoughts that come to mind when watching the new streaming TV show Daredevil on Netflix.

Daredevil is easily the best Marvel TV show ever done and puts Agents of S.H.I.E.L.D. and Agent Carter to shame with the ease at which it draws in viewers and in terms of quality. It’s even better than the DC TV shows The Flash and Arrow and that is a very high bar to pass. 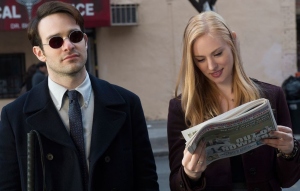 Set in the Marvel Cinematic Universe (MCU), Daredevil is undeniably more urban and grounded with its rare, vague references to the MCU and focuses correctly on the intimate lives of petty criminals and average folks in New York’s Hell Kitchen neighborhood. That locale is decidedly different than the actual neighborhood (now called Clinton) and that’s due to collateral damage from the climactic battle at the end of The Avengers. The result is a return to the seedy, hard-boiled streets the neighborhood last saw in the recent past and the perfect framework for Daredevil.

Based on the Marvel Comics superhero comic book created by Stan Lee and Everett, This version is heavily influenced by the stories done by comic book legend Frank Miller. It also uses many elements from Miller and John Romita, Jr.’s comic book mini-series Daredevil: The Man Without Fear, which depicts the origin of the blind superhero Daredevil. This TV show introduces Matt Murdock (Charlie Cox), a blind defense lawyer who operates secretly as a vigilante clad in black and uses his superhuman senses to aid him in fighting crime. As he comes to prominence both in his professional field and as a superhero, his work attracts the attention of Wilson Fisk (Vincent D’Onofrio), a major crime lord. And, of course, before long they’re butting heads with each other.

One thing to praise about this show has to be the performance of Charlie Cox. He just hits the ground running

as the sympathetic and haunted hero driven with a supernatural sense for justice. More importantly, Cox doesn’t go overboard with his portrayal and hits the right balance of lawyer by day, vigilante by night. Even though he is a superhero with enhanced senses (minus sight), and an indomitable fighting spirit, Daredevil is vulnerable and human. He takes severe beatings and even when he wins the aftermath shows on him through nasty cuts and bruises. This vulnerability makes him more endearing to us and we’re more concerned for the outcomes of battles.

These fight scenes are just brutal and stunningly filmed without the cheap use of shaky cams. There was one sequence in the second episode “Cut Man” that lasted for several minutes and the stunt work and cinematography done by the production was perfect. It exemplified the graphic and cringe-inducing nature of the fights in Daredevil’s world, while coming off as authentic. There wasn’t any use of special effects or wire work, just good old fashioned stunt work that was wonderfully choreographed. Each punch or kick looked like they hurt the fighter and the victim, and every punch that Daredevil landed took a lot from him but his unrelenting nature kept us cheering for him and at times I wondered if he would falter.

Complementing this realistic take on fighting is the way the show depicts his use of super senses. There aren’t any overdone CG sequences like in the Daredevil film. Instead, rather subtle and simple camera and audio tricks are skillfully used to convey Murdock overhearing conversations from afar and so on.

Speaking of camera work, as mentioned above, the cinematography throughout the series is film-quality work. It seems like we’re watching mini-movies on our TV sets. Plus, the production decision to film in New York City paid off grandly as we feel the grittiness and glamour of the Big Apple and the background complements the characters we meet. 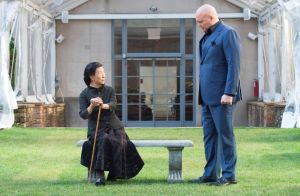 Let’s start with Fisk. Thanks to D’Onofrio’s subtle, but terrifying performance, Fisk is a huge, beefy, but cultured villain who is just broiling under the surface. His world is one of sophistication, but at the right moment (or wrong if you’re unfortunate enough), Fisk just let’s out this primal fury as he savages his opponents. It goes without saying that this show is very violent and not for the faint of heart.

But don’t think this course world is filled with vicious criminals. It’s also populated by more sympathetic types like Foggy Nelson (Elden Henson) who is Murdock’s law partner and a likeable presence. Others include the lawyers’ secretary Karen Page (Deborah Ann Woll) and Claire Temple (Rosario Dawson), a nurse who provides medical aide to Daredevil. Both are well played by these actresses and these women have many nuanced layers to them.

Daredevil is a triumph for Marvel and helps expand the intricate and varied MCU. More than that, it’s actually a surprisingly effective crime show without going over the top. This means that unlike say Gotham it doesn’t overly stress its comic book origins, which would’ve resulted in something that bordered on camp. No, Daredevil respects its source material and skillfully brings the hero and his world to life.